I went to the Brisbane Pride March and marched in Rattus! Trevor was keen for me to go, but I was too scared to go in Rattus until

marcwolf said he was going. Thank you so much for giving me the courage to go! I had a great time, and I'm told I appeared on ABC news! *puffs out furry chest with pride* The march itself seemed an uneasy mix of glitz and glamour and those tiresome political rallies complete with chanting (although at least the chanters were willing to parody themselves: "We're here, we're queer, we really need a beer!" was chanted while marching past a pub.). It's understandable the march should suffer an identity crisis, it being influenced by the success of the Sydney Gay and Lesbian Mardi Gras, but lacking the thousands thronging to see us it feels it has to justify itself with an overt political statement. Maybe over time it will mature into something more like the Mardi Gras, but with its own unique Brisbane flavour. 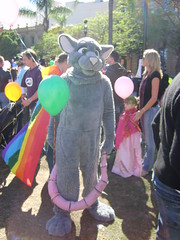 higgs_raccoon has found that the ABC news report is available here.
Collapse